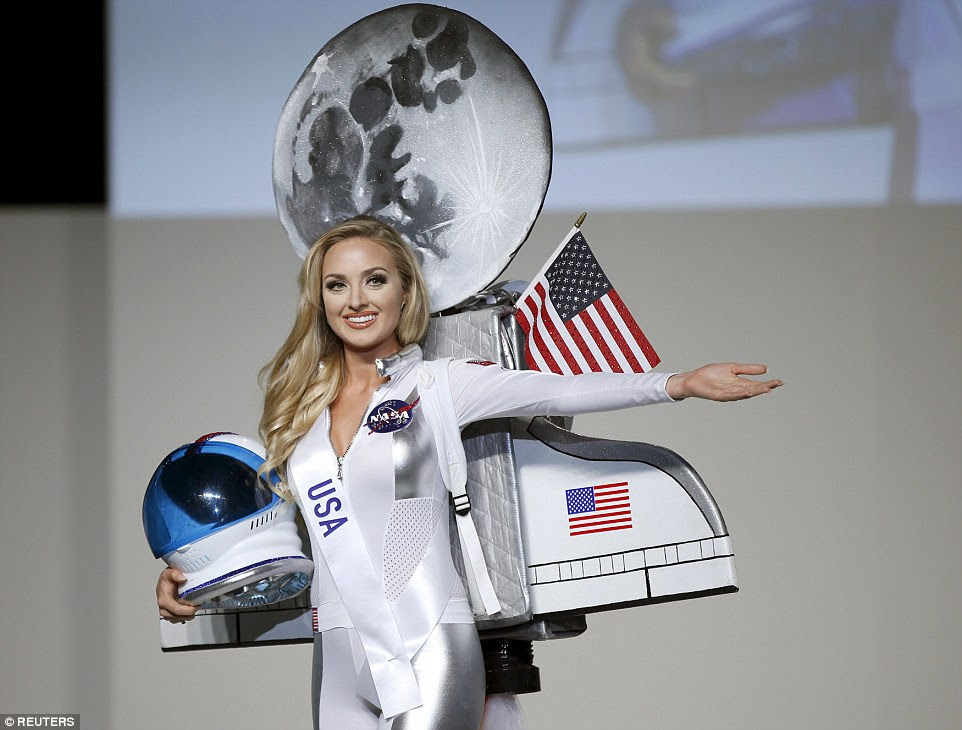 In its 55th year, the Miss International beauty pageant was held today in Tokyo. Representatives from 70 countries and regions took part. A highlight of the pageant was the national costume stage, where the beauties were asked to wear an outfit inspired by their home country. The blonde bombshell representing the USA wore a truly out-of-this-world costume inspired by the country's space programme NASA 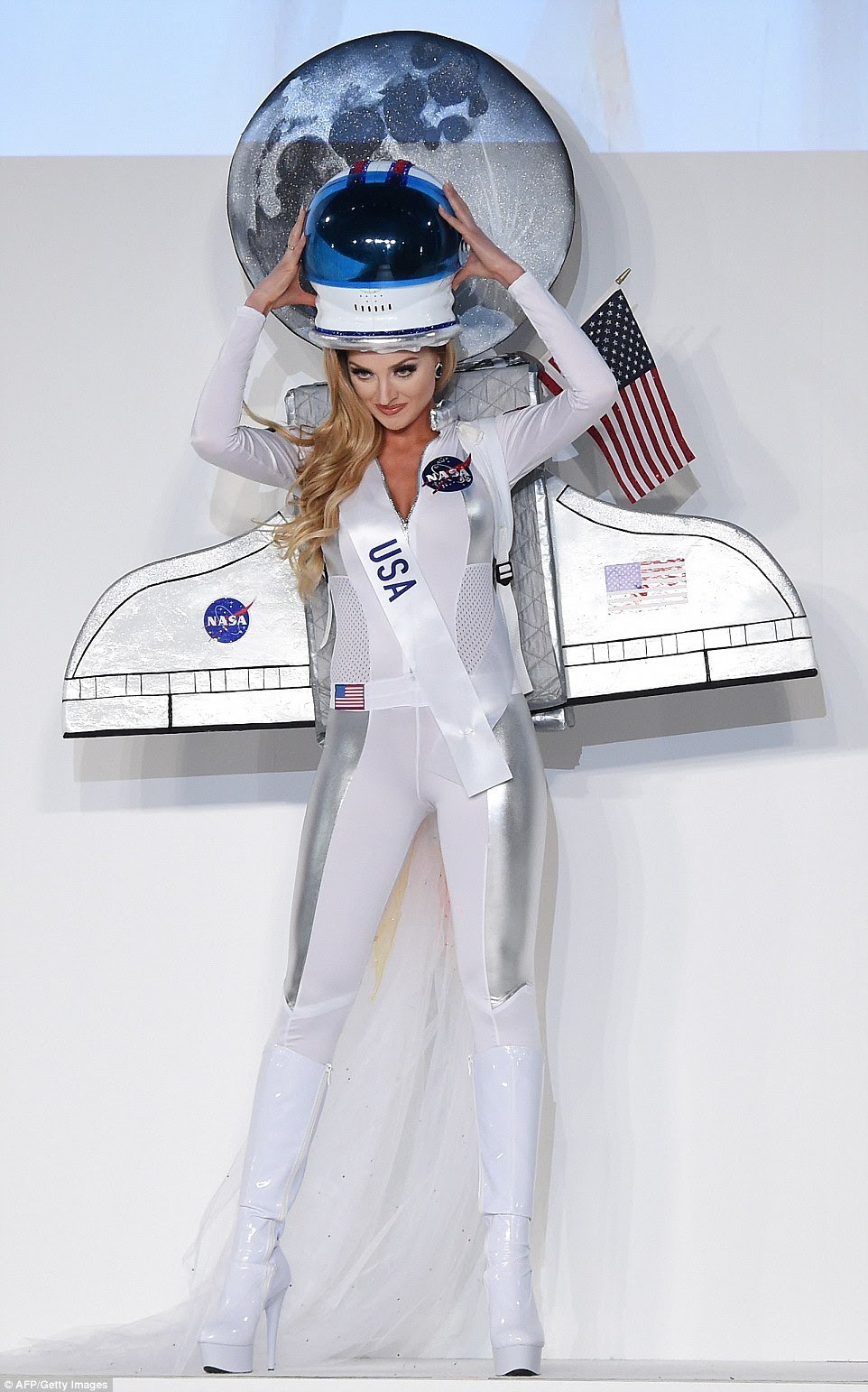 Lindsay Becker teamed a skintight white and silver catsuit adorned with a NASA badge with knee-high white PVC boots and an astronaut helmet. She also wore a cardboard spaceship as a backpack, complete with firing jets, a sparkly American flag and a moon, which created an ethereal halo above Lindsay's head Miss Paraguay Monica Mariani Pascualoto displays her national costume during the Miss International beauty pageant in Tokyo on November 5 2015. Representatives from 70 countries and regions took part in the beauty pageant 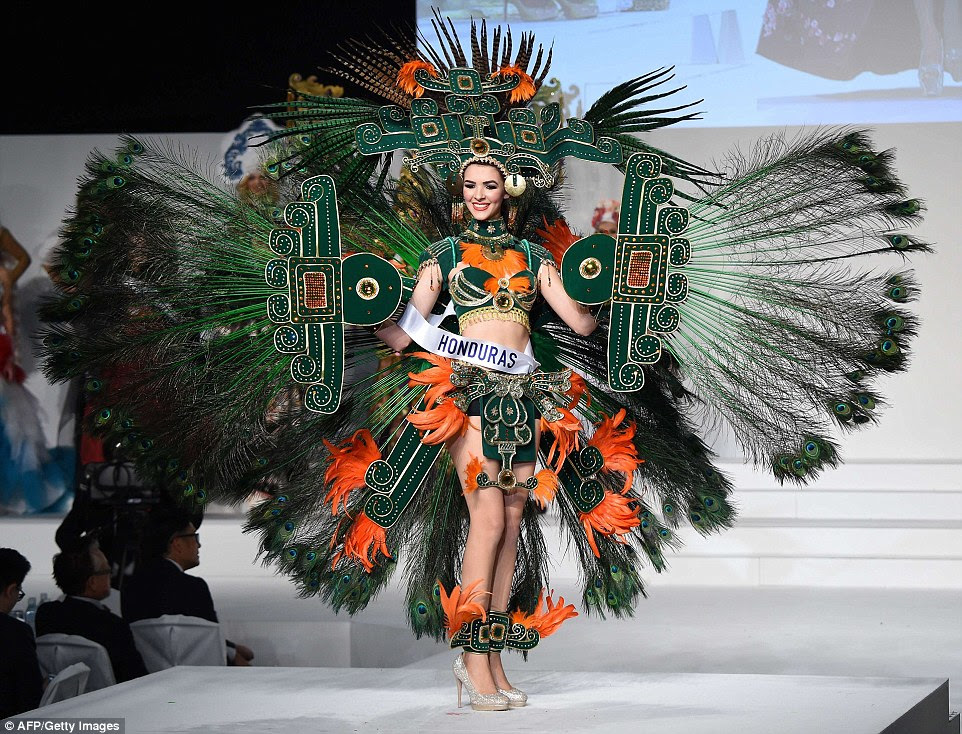 Miss Honduras Jennifer Valle displays her national costume during the Miss International beauty pageant in Tokyo. She opted for peacock feathers for her green and orange outfit, despite the national bird of Honduras being the colourful scarlet macaw 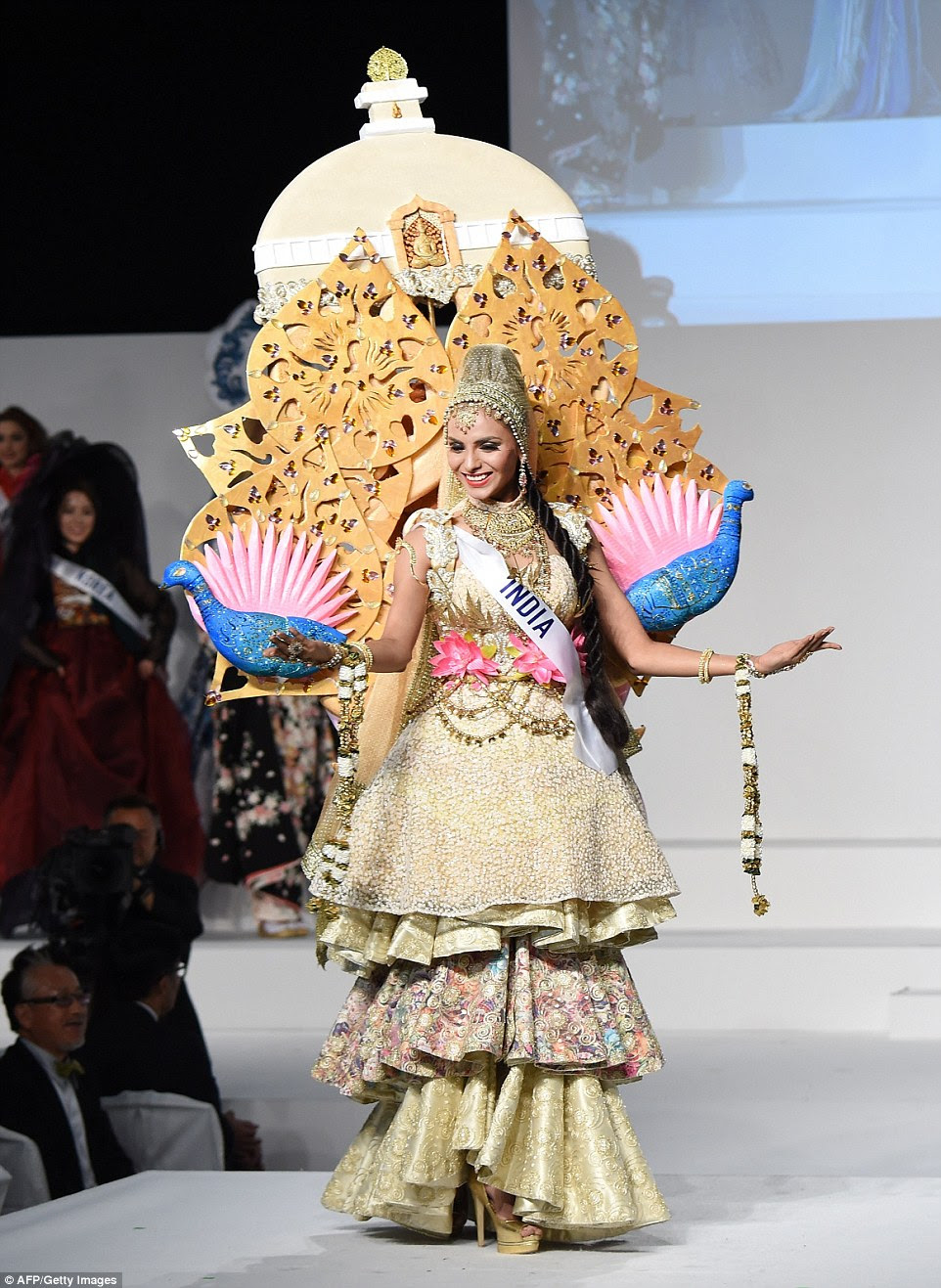 Miss India Supriya Aiman wore a heavy-looking pagoda-inspired outfit based on the Vishwa Shanti Stupa in Delhi. Her outfit also featured peacocks, India's national bird, although this time they had pink spiky feathers like a lotus flower. The gold tear-drop shapes were decorated with cut-out hearts and lead up to the main dome, which was decorated with a Buddha statue. Supriya also wore an intricate multi-layered gold dress with a water-lily and gold chain embroidered waist belt, a heavy gold collar necklace and embroidered headdress Another intricate costume came from Miss Indonesia, Chintya Fabiola. Inspired by the traditional dress worn by folk dancers, Chintya made a few moves herself, using her embellished staff as a prop. Her tall gold headdress was complemented by two gold tassled 'wings', a collar, a belt, cuffs and shin-high platform boots 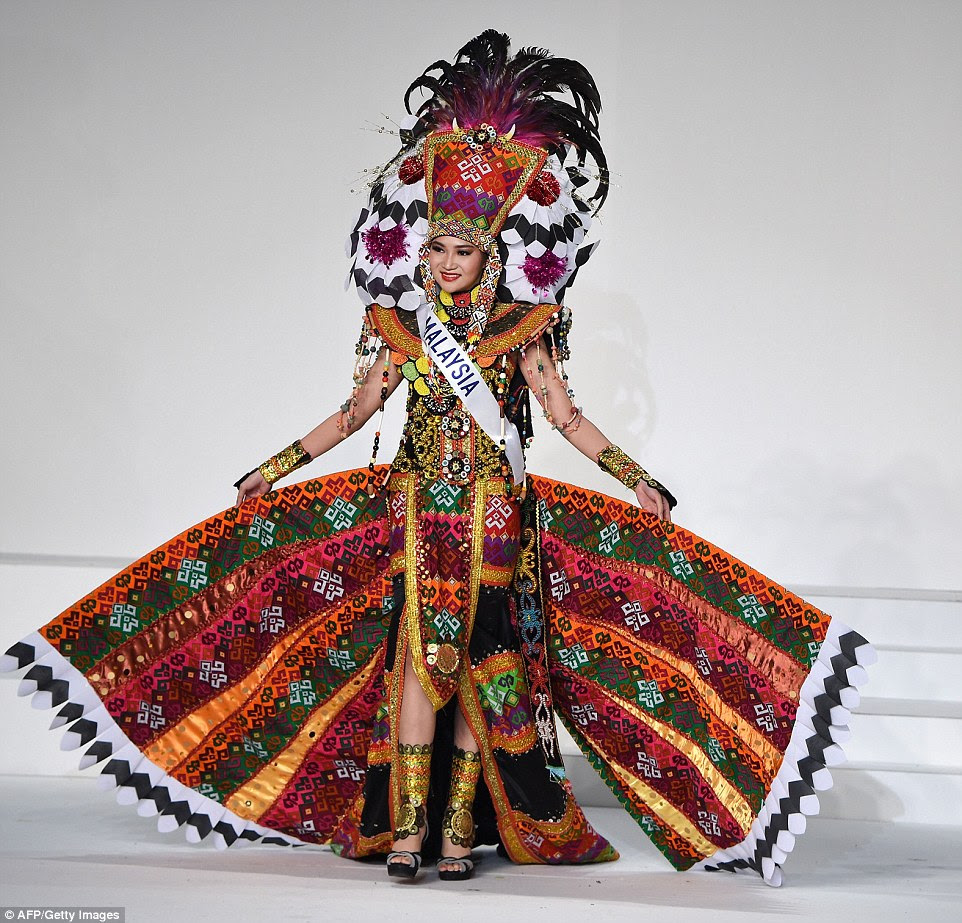 +28dered multi-coloured dress lined with gold. The aptly named Immaculate Lojuki dangled with coloured beads as she held out the wings to her skirt, the width balanced by samurai-eque shoulder pads and a flamboyant headdress with feathers and black and white flowers with sparkly pollen 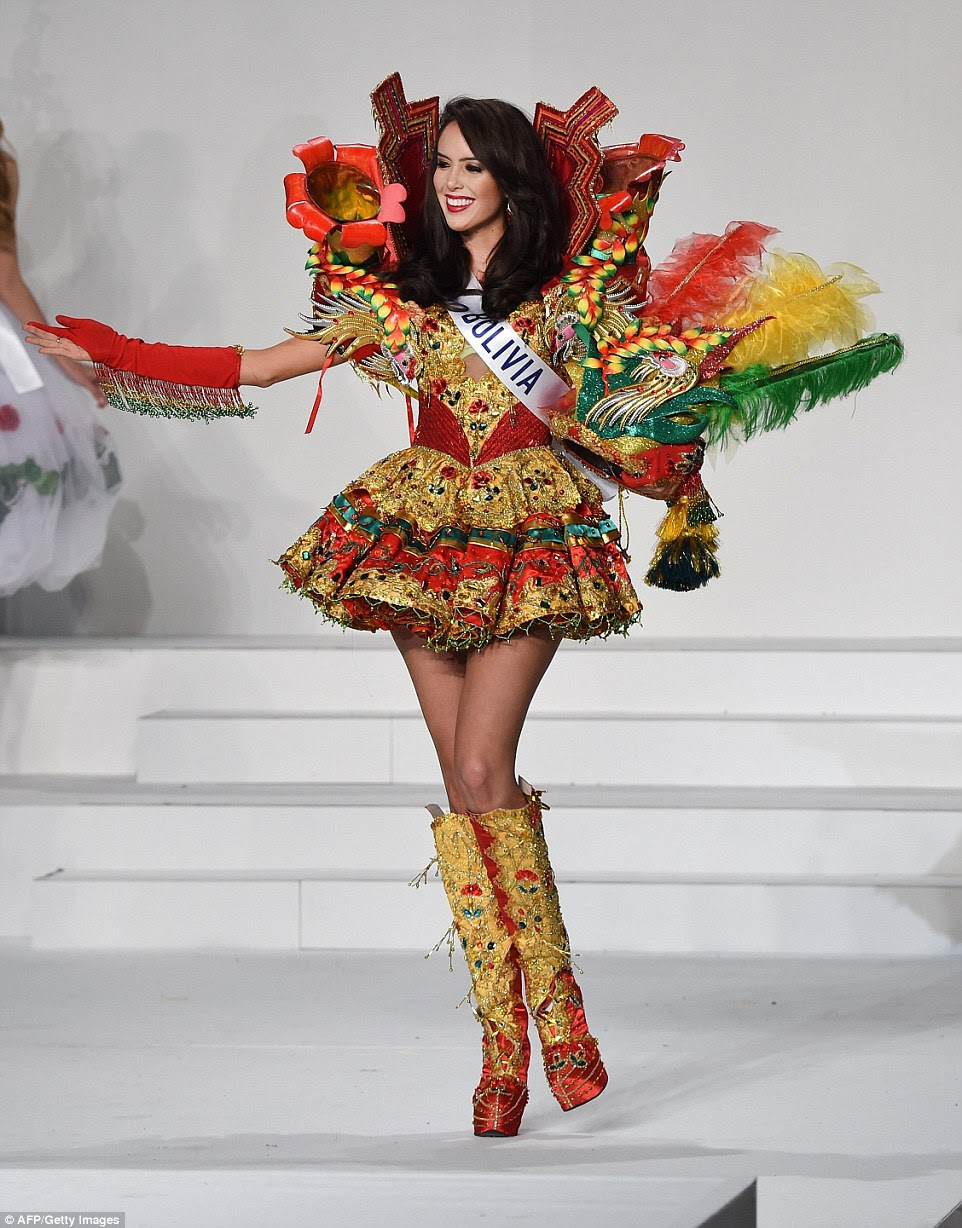 Miss Bolivia reflected her country's flag looking radiant in red, green and yellow. Alejandra Panozo Muguertegui's dress harped back to the style of Bolivia's folk costume, but was a little bit on the shorter side so she could show off her perfect pins and sparkly knee-high boots. Her collar was adorned with kantuta flowers, the national flower of Bolivia, and she held a model of an exotic-looking bird with red, green and yellow tail feathers Miss Argentina Helena Zuiani went all out with the bird look, giving herself wings made of orange, brown and grey and white striped feathers, and an ostrich-like plume skirt. Helena's look was completed with a jewelled bodice and crown. 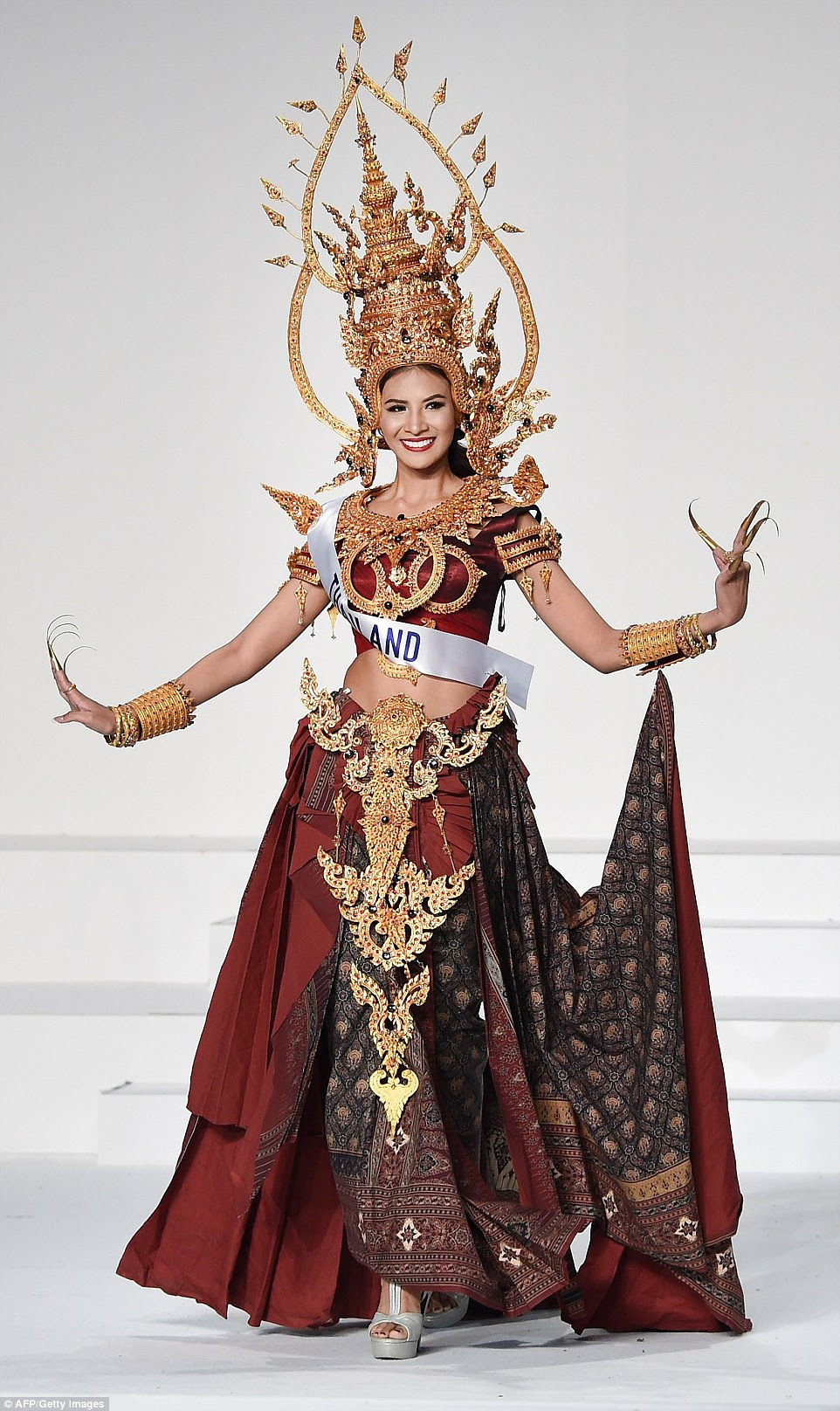 Miss Thailand wore the traditional dress of a fingernail dancer, which you would recognise if you have ever been to Thailand, or indeed a fancy Thai restaurant. Of course Sasi Sintawee wore a particularly intricate one, with a temple-inspired headdress which is so detailed and tall it wouldn't look out of place in a Thai miniature village. The gold continued around the collar, cuffs and waist, with her dress itself made in a sumptuous red silk with Oriental skirt folds and fabric design 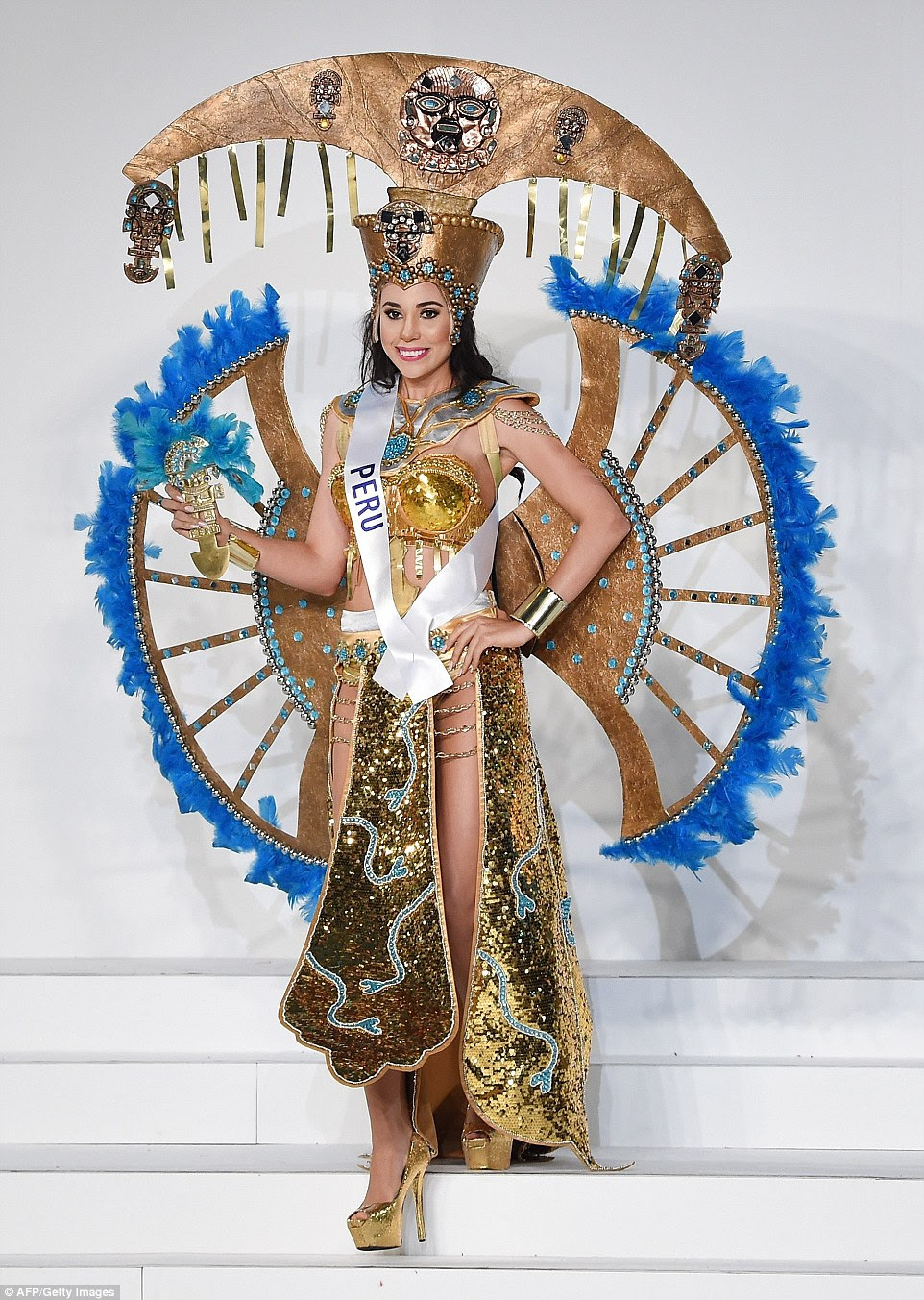 Miss Peru also impressed on the headwear stakes with what looks like an upside down herb chopper on her crown. Cynthia Lucia Toth Montoro's balance is perhaps helped by her fan-like golden wings, dotted with blue gems and fringed with blue feathers. Her look is completed with a golden sparkly skirt, shoes and cropped Madonna-esque bodice 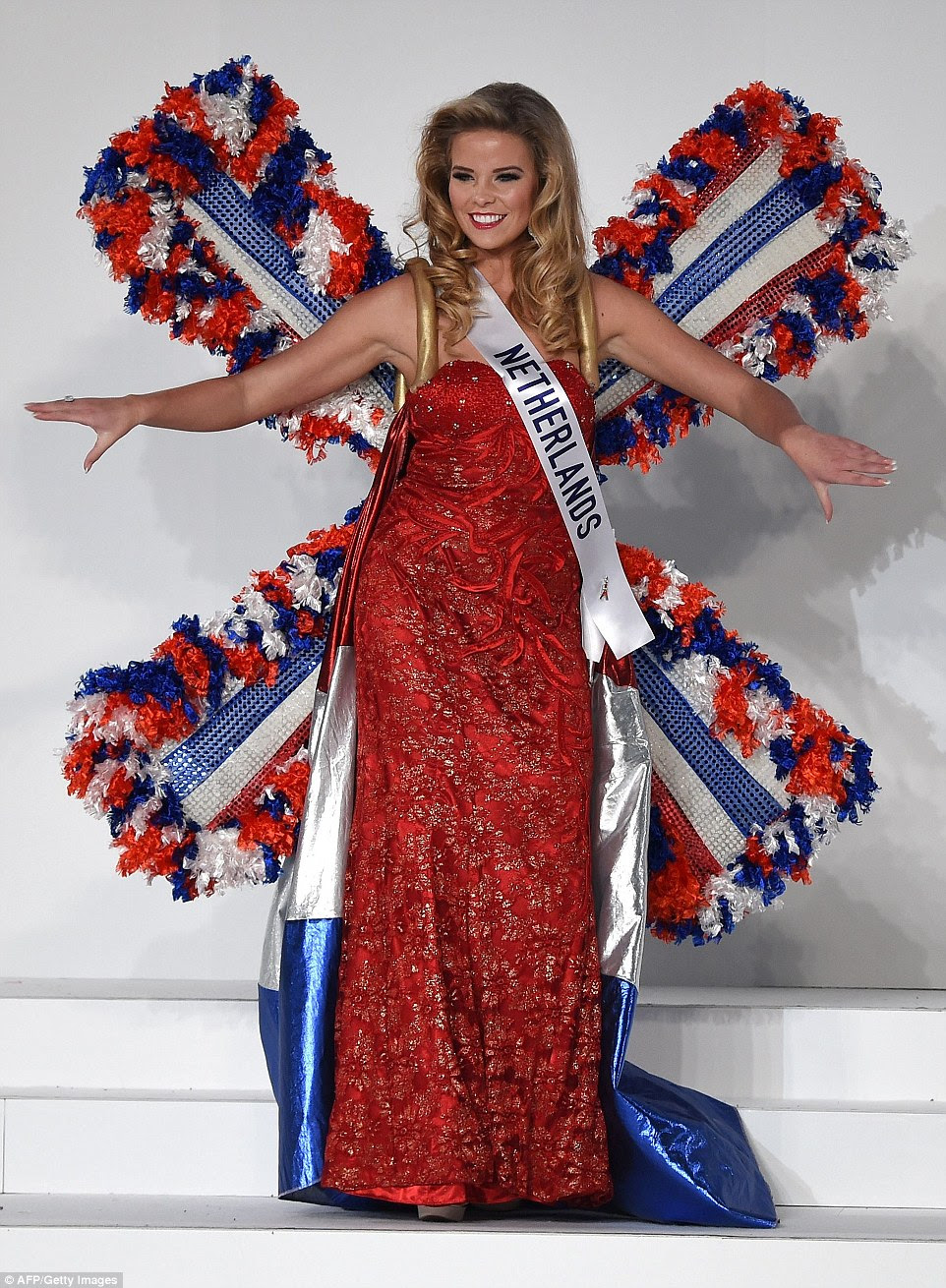 There's no prizes for guessing what inspired Miss Netherlands' outfit. Rachel van der Meulen went all out patriotic dressed in her nation's flag colours of red white and blue, plus she adorned Holland's icon on her back in the form of windmill wings. 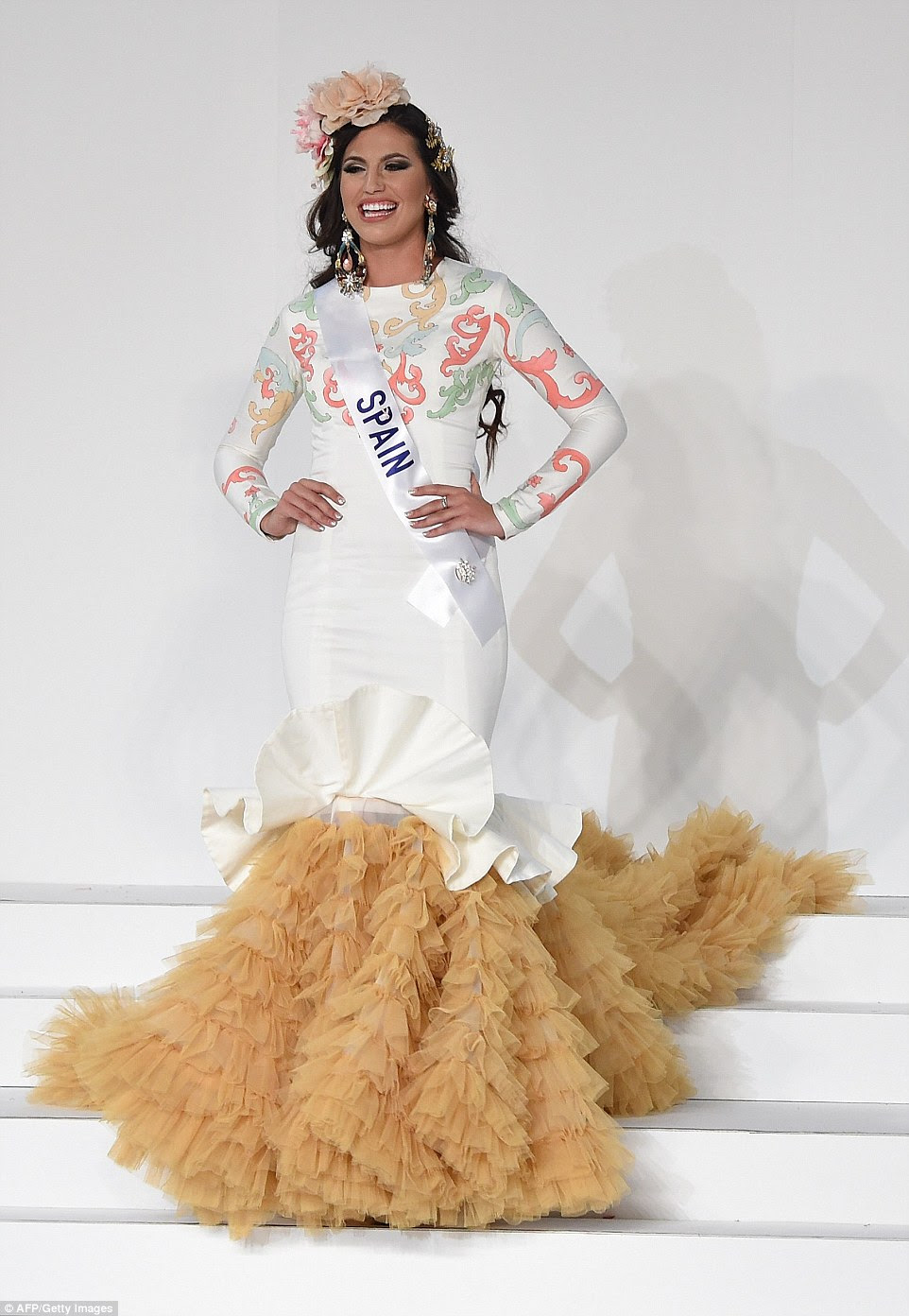 Of course Miss Spain had to have a flamenco-inspired skirt, with layers of tulle swinging as she walked. But Cristina Silva forewent the traditional red for a soft ivory with pastel swirls on the sleeves and top of her high-neck body-hugging dress 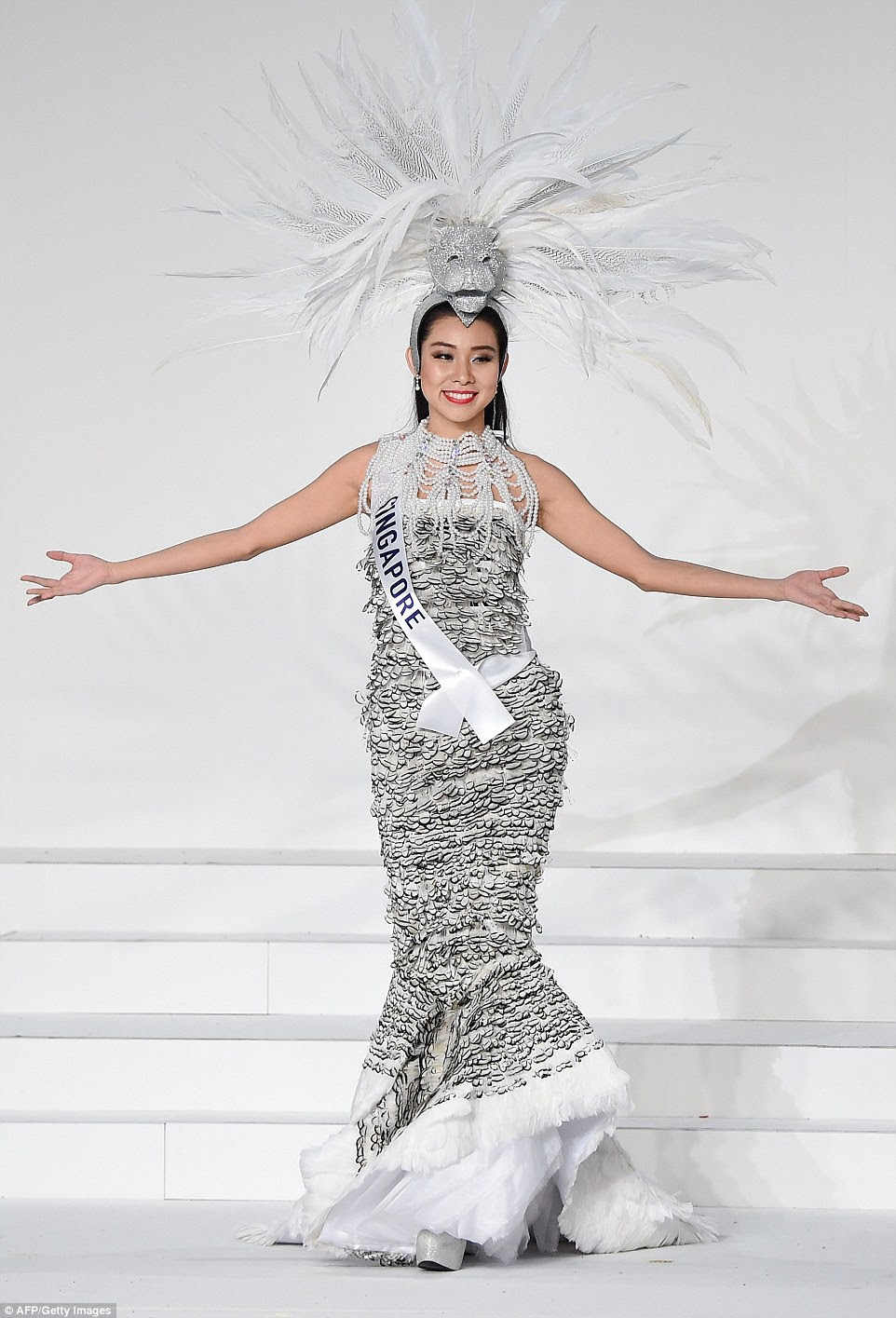 Miss Singapore came dressed as the country's mascot, the half-lion half-fish Merlion. Covered in silver scales, Roxanne Zhang's fish tail breaks into white feathers, which look like a bit like flaked white fish meat, which we guess was the desired effect. Wearing an extravagant pearl necklace, her sparkly lion headdress has a mane of white and black and white striped feathers. 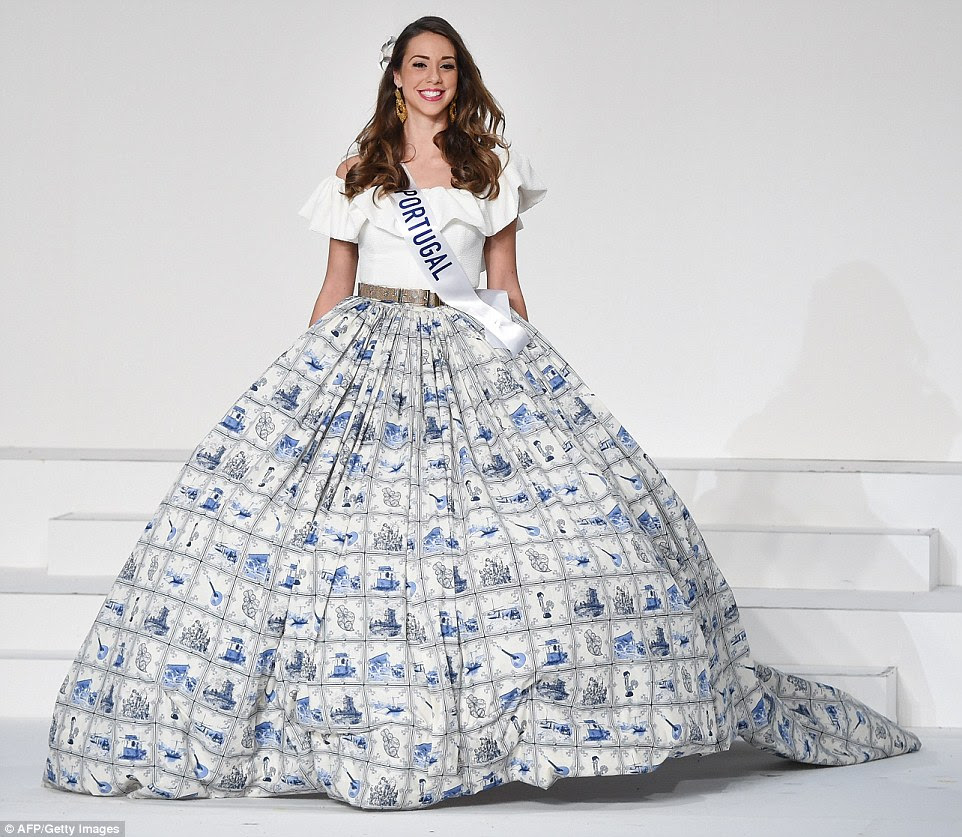 Portugal's instantly recognisable blue-and-white tiles formed the basis of Miss Portugal's skirt pattern. The full skirt, held out by a crinoline petticoat, depicts traditional houses, instruments and scenes in the tiled design. Isabel Vieira teamed the skirt with an off-the-shoulder top with ruffled edging and a grey waist belt Sabrina Yeung represented Hong Kong with a beautiful maroon silk skirt embroidered with cherry blossom - which blooms in the country's parks and streets come spring time - and a Chinese dragon. With sky-high sparkly silver platforms and holding a red fan, she also wore a floral halterneck crop top and intricate comb in her hair. 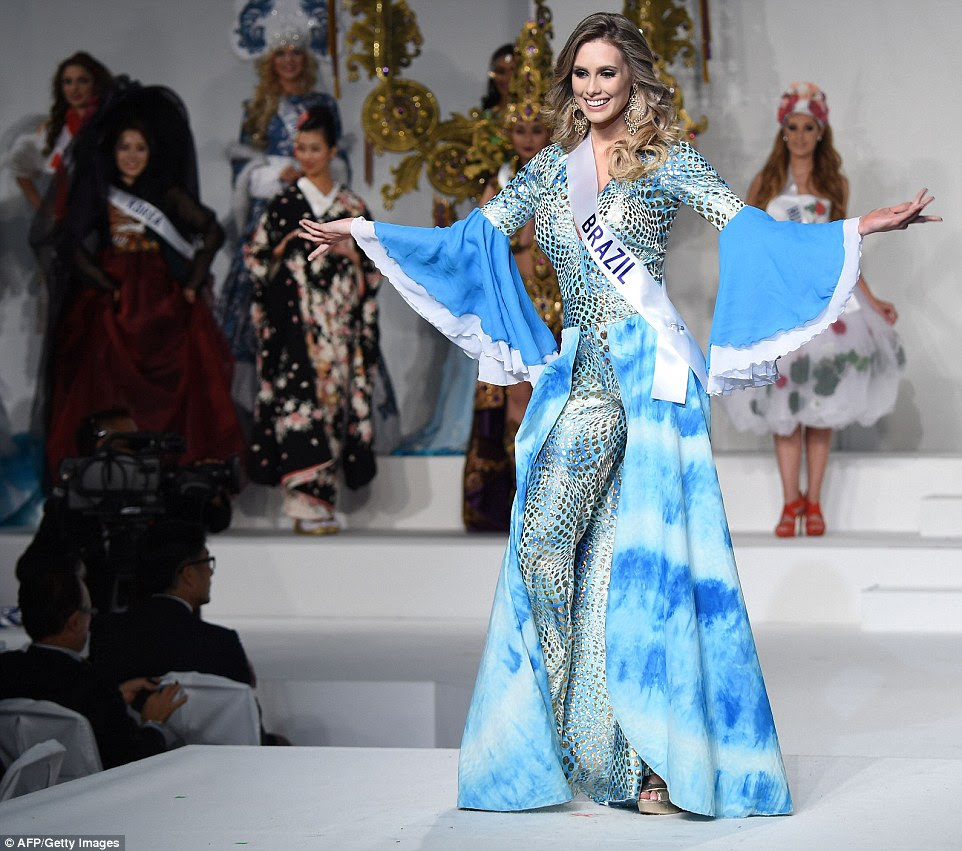 Miss Brazil stepped back in time with a disco-inspired tie-dye jumpsuit. Isis Stocco's flared sleeves and trousers took audiences back to the Seventies with the disco ball print ensuring they had a boogie while they were there. The blue tie-dye skirt, though offered shades of the Nineties - and to be honest we're not sure what any of it has to do with Brazil. 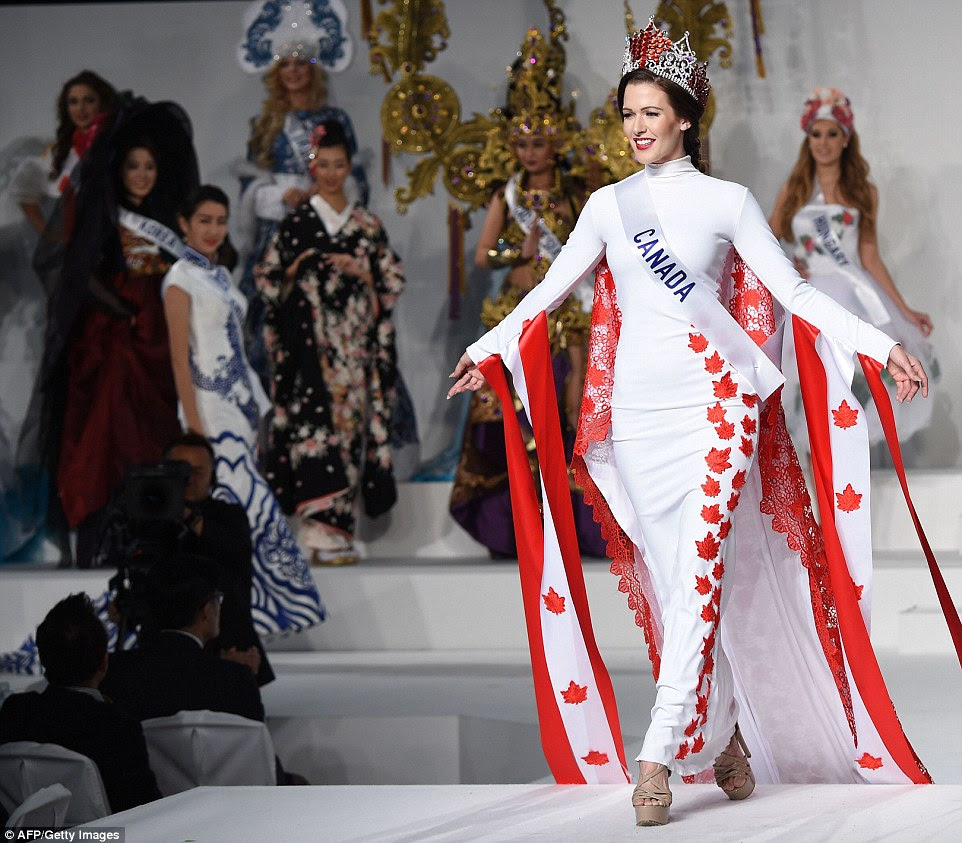 Miss Canada Kathryn Kohut represented the Canadian flag in her figure-hugging white and red dress and flowing cape embroidered with the iconic maple leaf. She glammed up the look with a red and silver crown. 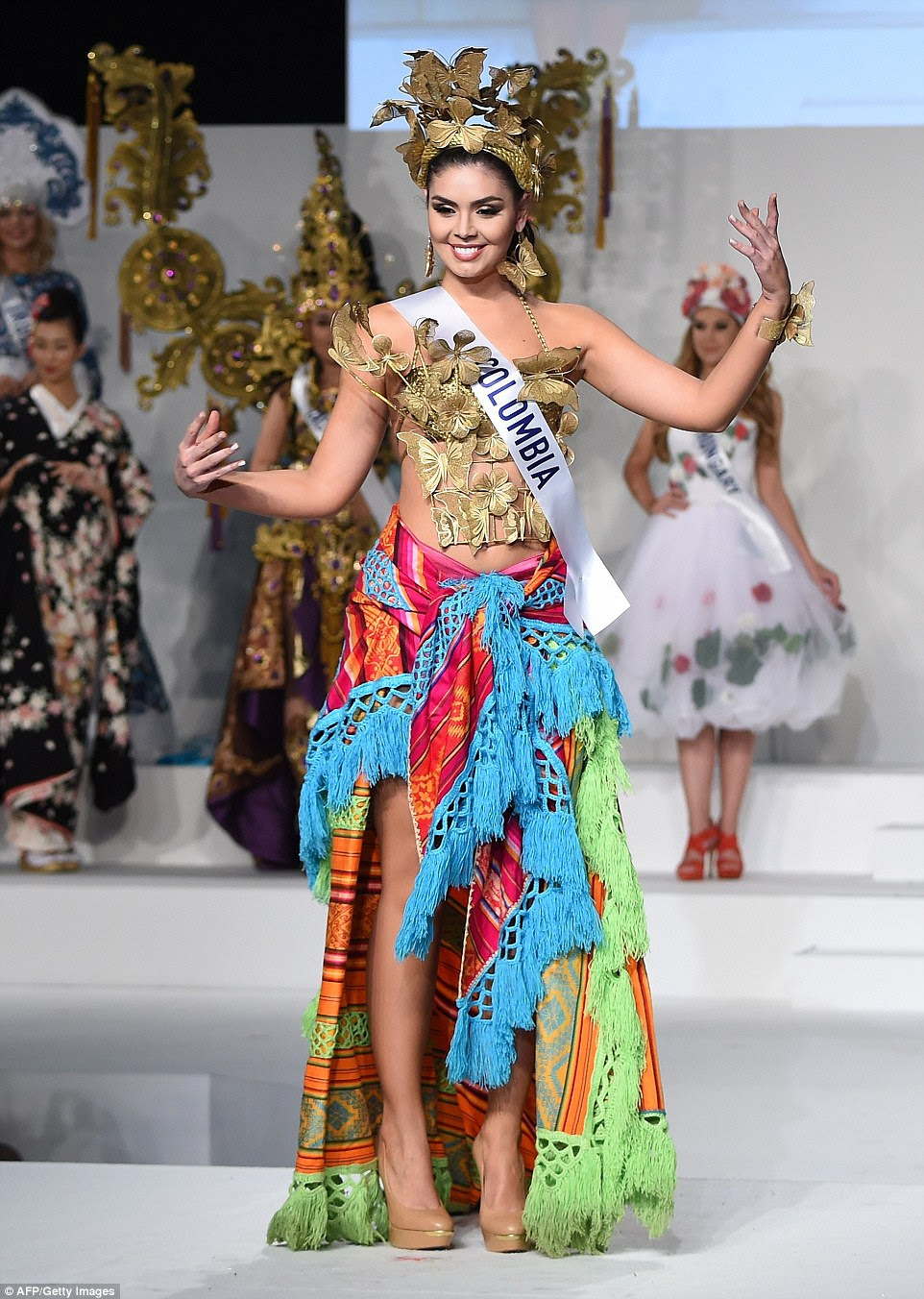 Miss Colombia appeared to take a classically colourful patterned blanket and tie it around her waist to wear as a skirt. We'll wait for that one to catch on - or perhaps she had a wardrobe malfunction with her original skirt? Either way Natalia Ochoa Calle's top and crown had a bit more effort put into them, adorned with sparkly gold butterflies and flowers 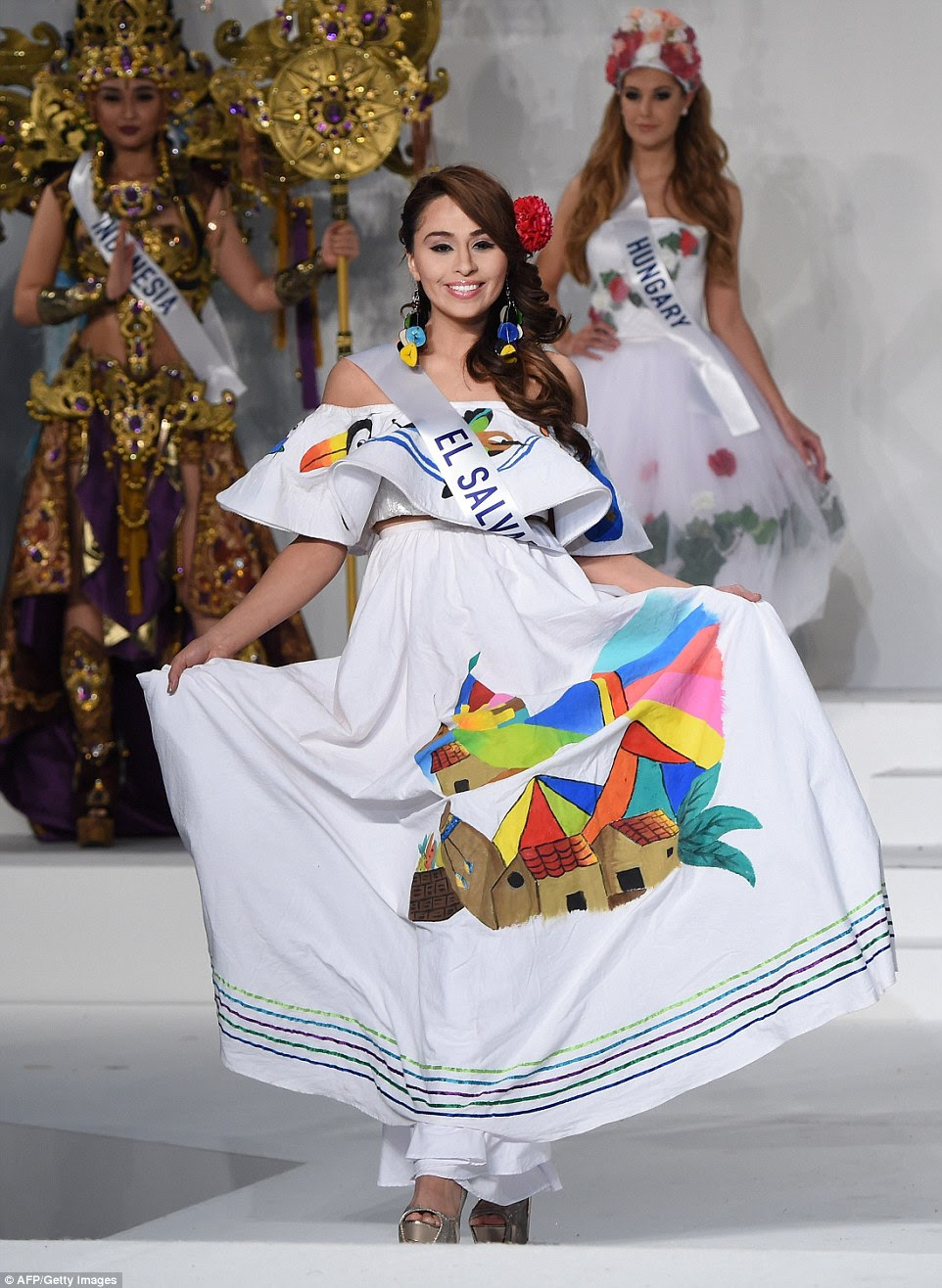 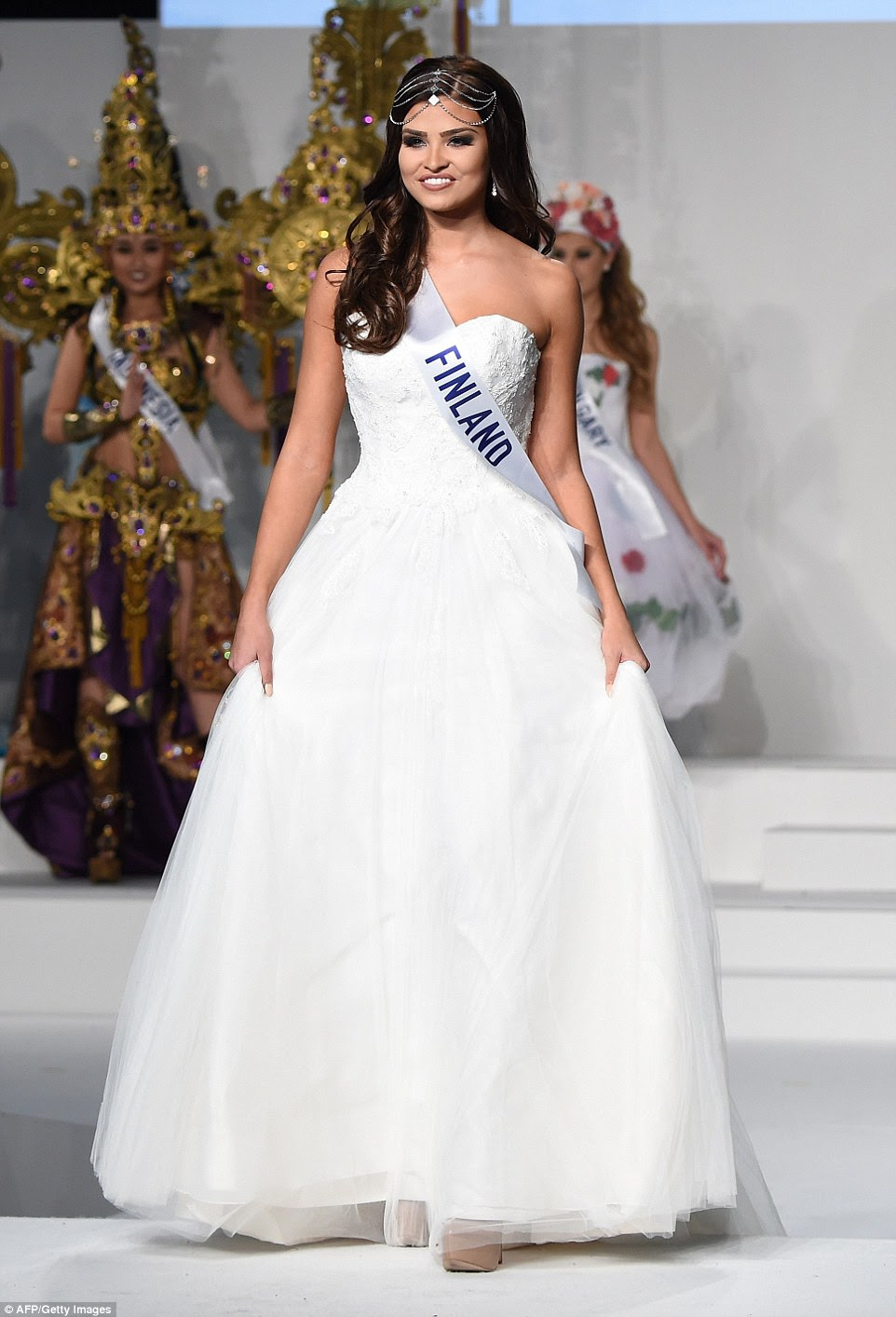 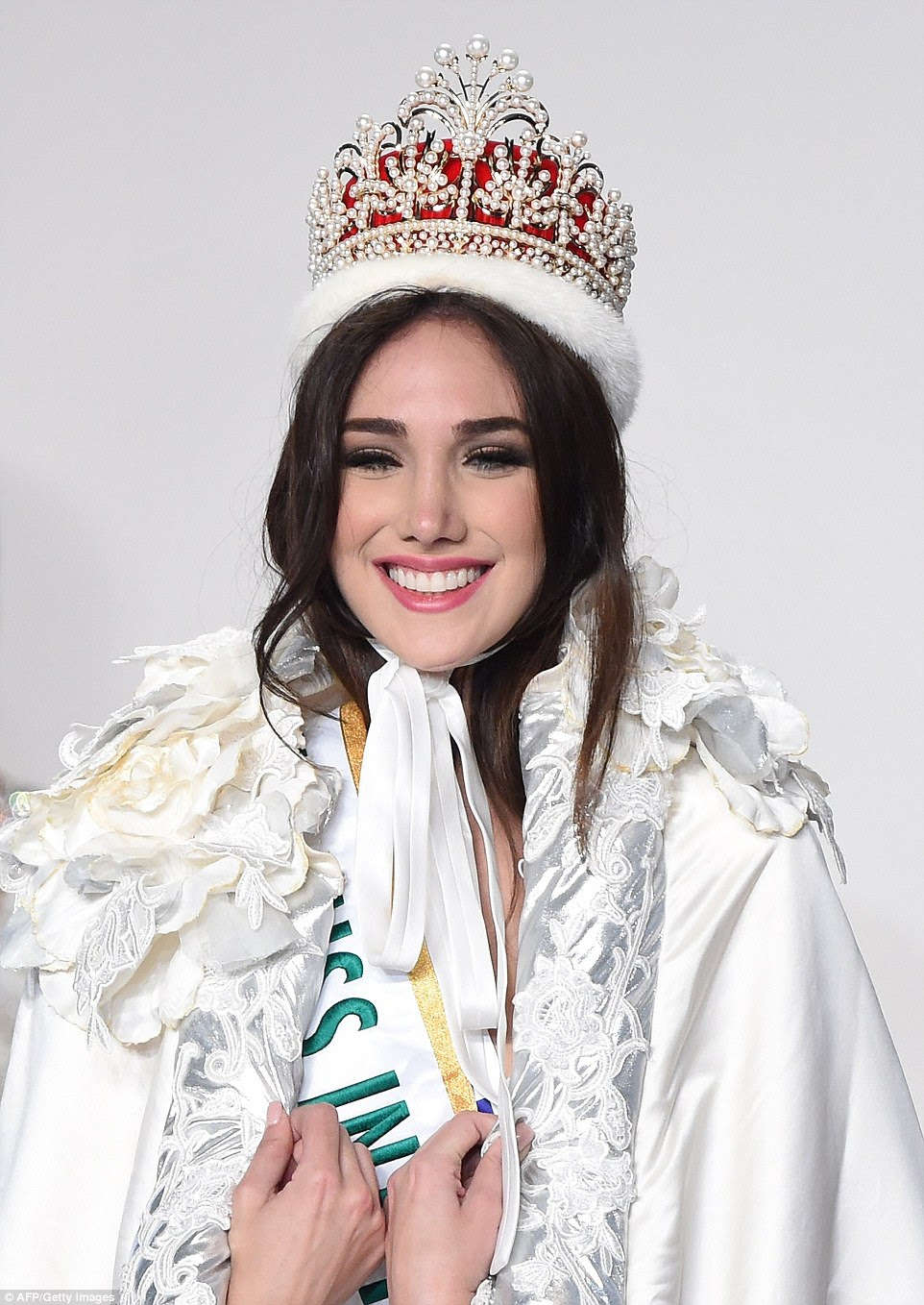 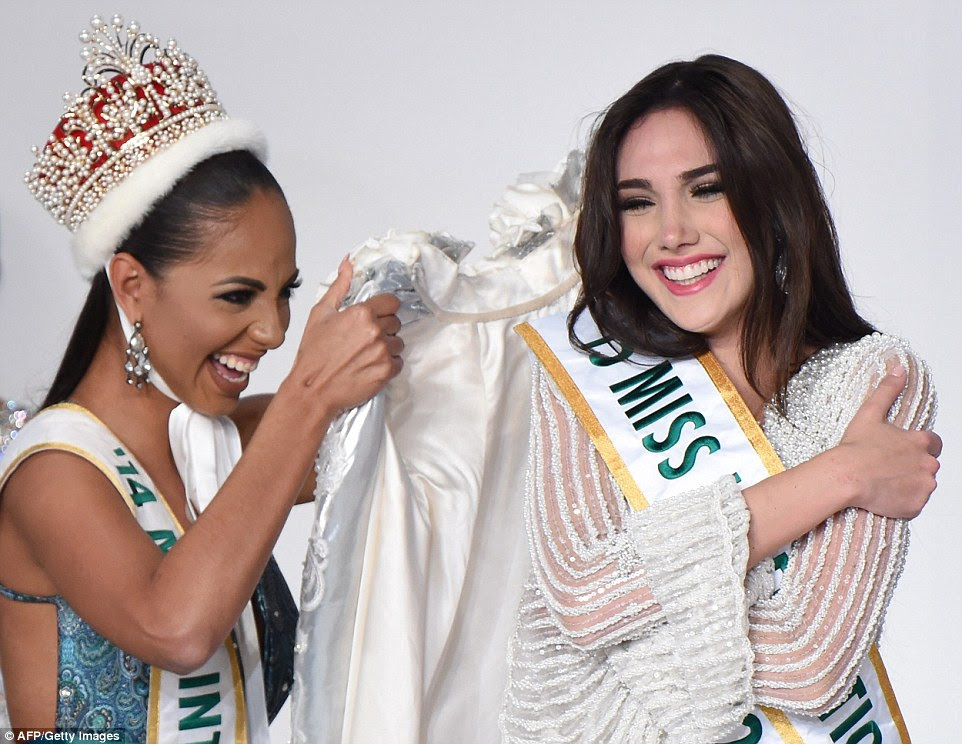 Wearing an elegant white dress glittering with sequins and pearls, Edymar smiled through happy tears and hugged herself as she was presented with her crowning glory 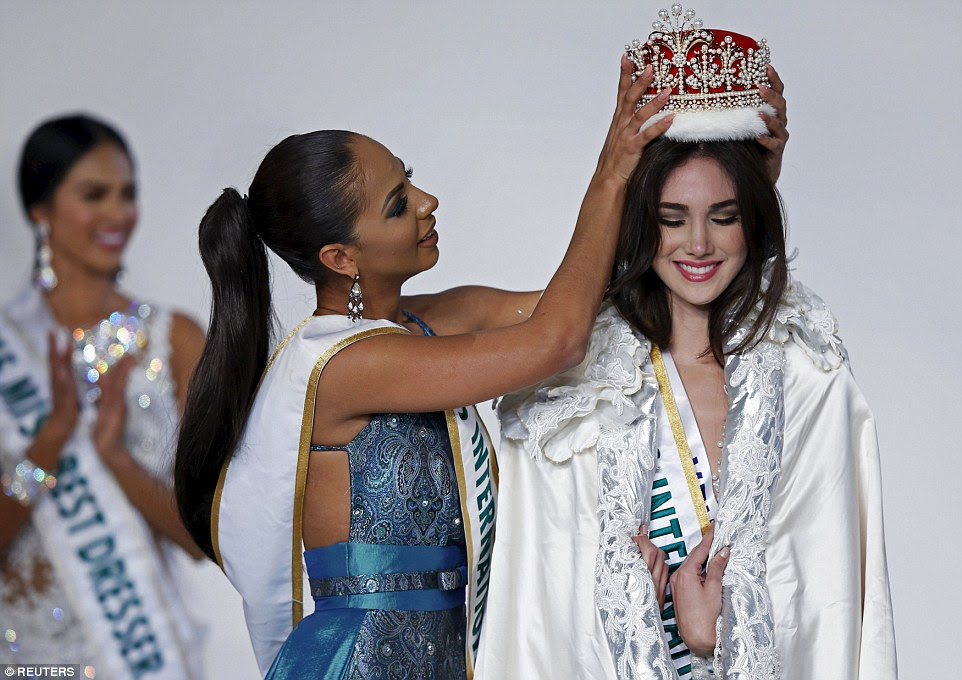 The pearl-dotted, red velvet and fur trim crown and an embroidered white cloak were placed on Edymar by a smiling Miss International 2014, Valerie Hernandez Matias from Puerto Rico 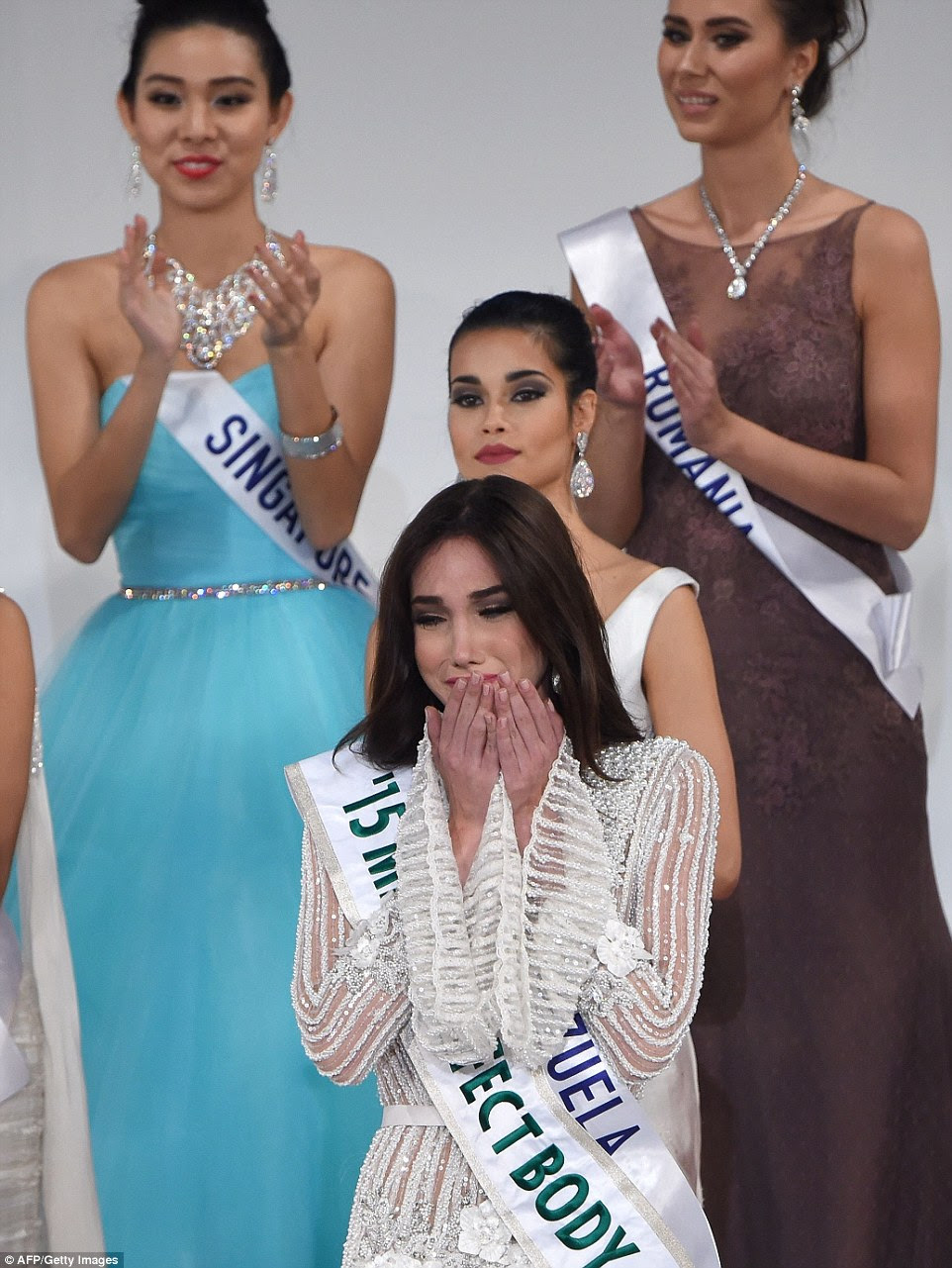 Miss Venezuela bursts into tears as she is announced as Miss International 2015. Miss Singapore, Miss Romania and another contestant do their best to smile and applaud for the camera behind her 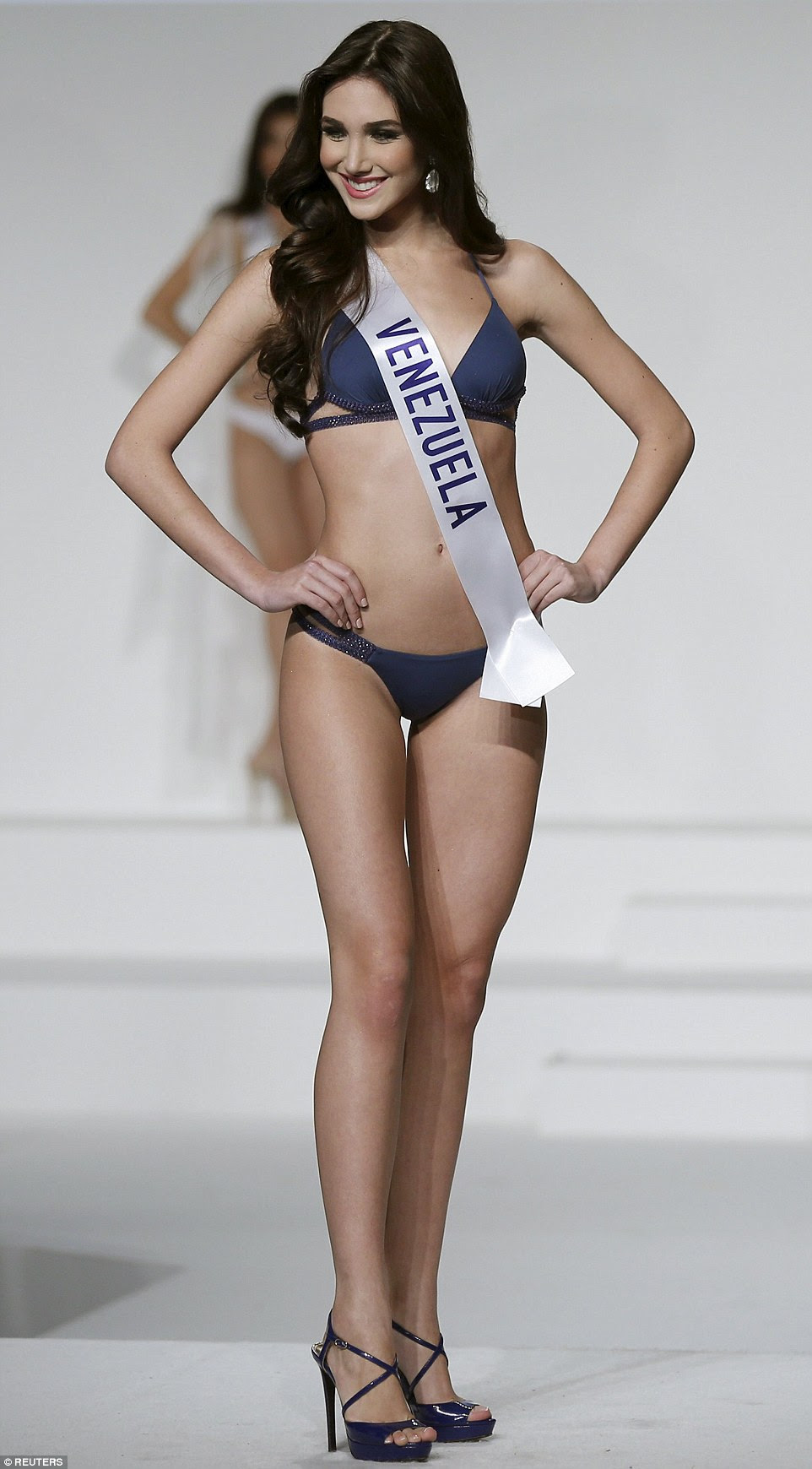 Miss Venezuela was also elected Miss Perfect Body thanks to her slim, toned physique which she showed off in a navy blue bikini with diamante-studded straps and strappy PVC high heels 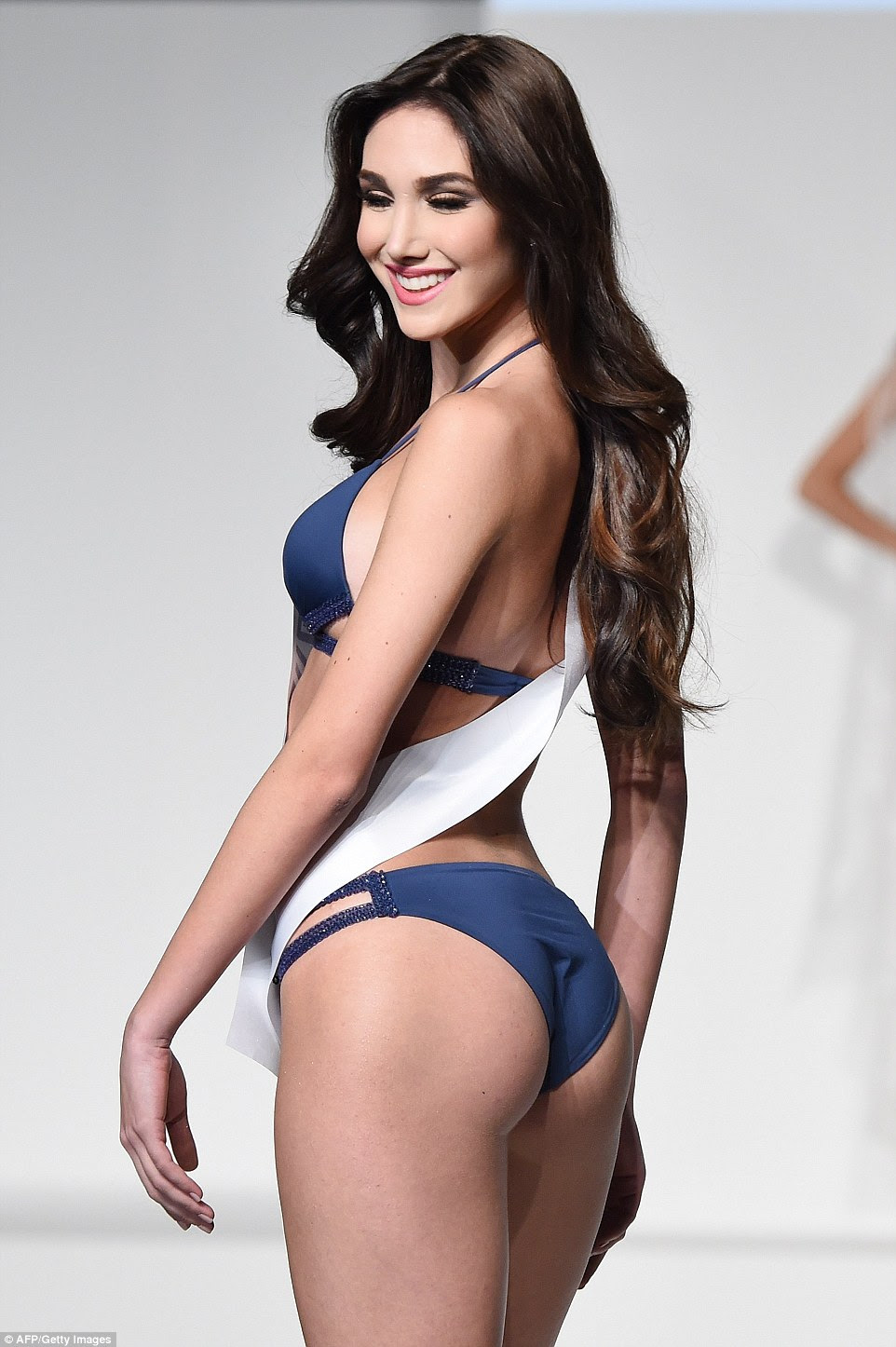